There was a 10 per cent reduction in UK carbon dioxide
emissions in the twelve months to October 2014 compared to the
previous year, new government data shows.

The majority of the 49 million tonne reduction came
from reduced energy emissions as a three year surge in UK coal
use
came to an end, with
renewables and gas picking up the slack in power
supplies.

The reduction saw total UK carbon dioxide emissions
fall to their lowest level in the past quarter-century, to 28 per
cent below 1990 levels (the dark grey line on the chart below).

UK carbon dioxide emissions since 1990. Graph by Carbon
Brief using emissions data from the
Department for Energy and Climate Change

Carbon dioxide emissions had been on a steady
downwards trajectory since 1990, the base year for carbon reduction
targets under the UN’s Kyoto Protocol and the UK’s legally binding
Climate Change Act.

But a cold winter in 2010 and
cheap coal from 2011 caused brief spikes in UK
emissions. These factors were reversed in the latest data with a
fall in coal emissions and mild weather being the major causes of
the 10 per cent year on year reduction seen up to October
2014.

The year on year reduction to October of
amounted to 49 million tonnes. The components of this reduction are
shown in the chart below, with 29 million tonnes (60 per cent)
coming from the energy sector where coal use fell by nearly a
quarter.

Another 15 million tonne reduction (30 per cent
of the total) came from the residential sector, as mild
temperatures reduced demand for home heating. A fall of five
million tonnes (nine per cent of the total) from businesses
accounted for most of the remainder. 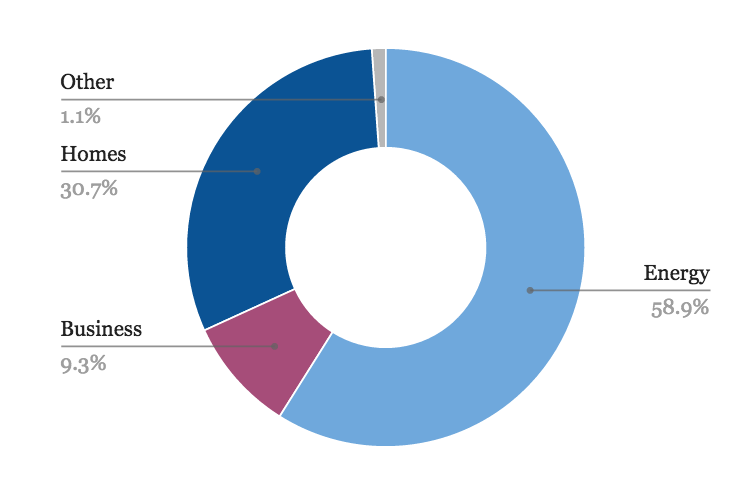 Share of the 49 million tonne reduction in UK
carbon dioxide emissions between the twelve months to October 2014
and a year earlier. Graph by Carbon Brief using emissions data from
the
Department for Energy and Climate Change

The latest UK emissions data show what a big impact
coal use has on carbon dioxide emissions. That’s why recent
research found 80 per cent of the world’s
coal reserves must remain in the ground if
we’re to avoid dangerous climate change.